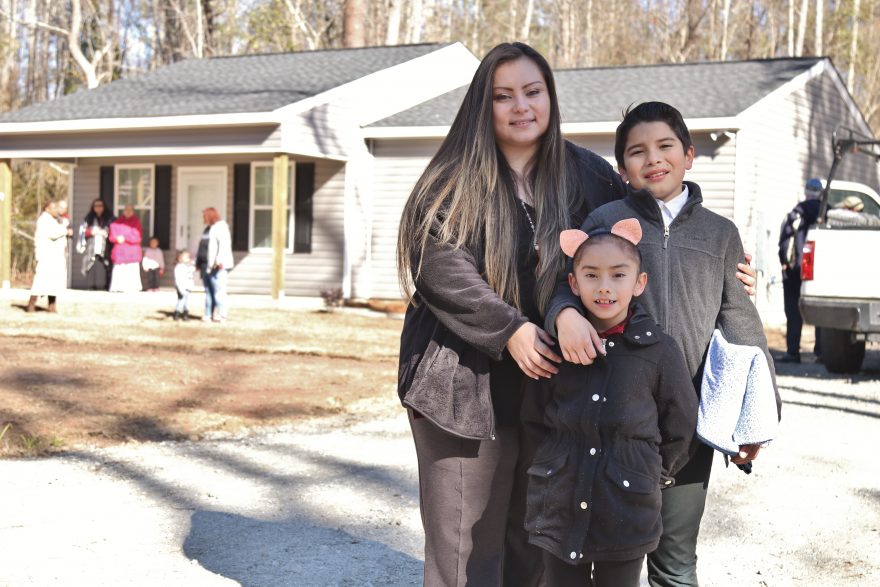 By Grant Merritt. This article is adapted from one that originally appeared in The News Reporter on February 4, 2019.

After learning about Cape Fear Habitat for Humanity from a former coworker who read about it in The News Reporter, Beatris Hernandez filled out an application in August 2017. Eighteen months later, she and her two children have a new place to call home on Davis Avenue in Whiteville, thanks to the non-profit organization.

“When I was young, I didn’t have a place to call home,” Hernandez said. “That was one of my main goals, and now I’ve accomplished that.”

One of Hernandez’s favorite aspects of her new house is having more space and both of her children having their own bedrooms. She explained that her current living situation is too small, but she and her children are very excited to move into the new house on Valentine’s Day.

When asked what was going through her mind at the dedication of her new home in early February, Hernandez said she was “excited, emotional, nervous, amazing, wonderful and grateful.”

Spain explained that the SECU/Habitat “Mountains to the Sea Challenge” donated $10 million. With that support, the SECU Foundation committed to sponsoring one new or rehabbed home in each of North Carolina’s 100 counties. Hernandez’s house was the one selected for Columbus County.

Amy Davis, homeowner services manager for Cape Fear Habitat for Humanity, said that homes are not given away for free. Each selected homeowner must work for their home through volunteering with other Habitat for Humanity construction projects in the area. Hernandez learned how to build houses through volunteer work, and she attended classes to learn how to manage a home, budget and landscaping.

“It’s good to know how to do that if your house needs maintenance,” Hernandez said. “We worked on ground-breaking, framing and painting, but it feels good to help others.”

She said it was hard work, but it was fun meeting new people in the process.

Davis explained that each person selected for a Habitat home must show that they can pay for the home without spending more than 30 percent of their income on the mortgage payment, taxes and insurance. She said that Hernandez helped transition the home management class in Wilmington to an online class because of her distance to Whiteville.

“She also completed 200 hours of sweat equity with helping us build other people’s homes in Wilmington,” Davis said. “She’s been an amazing partner because we don’t give homes away. When she makes a mortgage payment, she’s putting it into something that’s hers.”

According to Davis, acquiring land is one of the biggest obstacles in building a Habitat home. She said that people could donate land to the non-profit and write it off on their taxes.