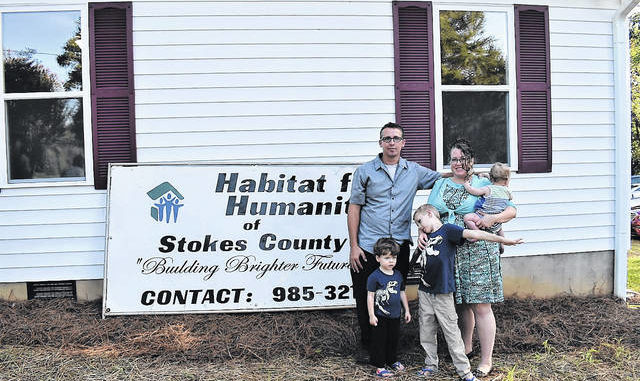 This story was adapted from an article that originally ran in The Stokes News on August 29th, 2018

Habitat for Humanity of Stokes held a dedication ceremony on Thursday afternoon for new homeowners Gray and Jessica Brewster.

“There are so many people who helped make this day possible,” said local Habitat for Humanity chairman Sandy Smith. “Businesses, churches, civic groups and individuals came together with such enthusiasm and dedication to this project. Countless hours and many dollars were donated to support our mission for which we are so grateful.”

The home, located on West Street in King, is the 10th built since Habitat for Humanity of Stokes was formed in 2001. Since then, the nonprofit has constructed homes in King, Walnut Cove, Sandy Ridge, Pinnacle, Madison and in February 2017 opened a ReStore on Main Street to help fund the building projects.

“It’s been an exciting time for us, seeing all of this come together,” Smith told the crowd of around 75 people.

She recognized the State Employees Credit Union who issued a challenge to Habitat for Humanity of North Carolina to build a Habitat home in each of NC’s 100 counties. The Habitat for Humanity affiliate selects the homeowner, organizes volunteers, builds/renovates the homes, sells the homes, and the home buyer receives a zero-percent interest mortgage, making the homes more affordable. Once a home is built as part of the SECU Foundation’s “Mountains-to-the-Sea Challenge,” SECU buys the mortgage from the affiliate so that the money can immediately be put back into the organization to build another home. Smith also thanked the American Snuff Company, who provided a substantial grant, and donor Pat Griffin for her continued financial support.

The project took around a year to complete and included finding a lot, an eligible family and managing volunteer and community support.

“This wouldn’t be possible without volunteers who work so hard,” Smith said. “It warms your heart. We use the slogan, ‘We’re not a handout, we’re a hand up’ and that’s so true. While the house may be sold to this wonderful family, it will always represent to us the community spirit and love that built it.”

Elaine Calloway serves on Habitat’s family support committee and explained the program is “not a giveaway program,” as some believe.

When choosing a recipient, Habitat looks at a family’s housing need, the situation they’re currently in, and ability to pay.

“Our purpose is to aid the provision of affordable housing for low-income households within the service area of Stokes County. It’s pretty simple, but it takes a lot of money and a lot of people to make this happen,” she said.

“They have three beautiful boys and I loved getting to know them. They’ve worked alongside our volunteers and Jessica (Brewster) volunteers at the store. They work hard and they’re very deserving. Like all of us, they wanted a better life for their children.”

“I couldn’t help but think about many years ago when a group of us in Stokes County started meeting in church basements and fellowship halls and we started talking about why we didn’t have a Habitat for Humanity here,” Calloway said. “That was about 20 years ago and out of that group, the first board of directors came about. This is our 10th house and 10 families now have houses that probably wouldn’t have had we not started this program. It’s a great testament to this community and the people who have served on the board.”