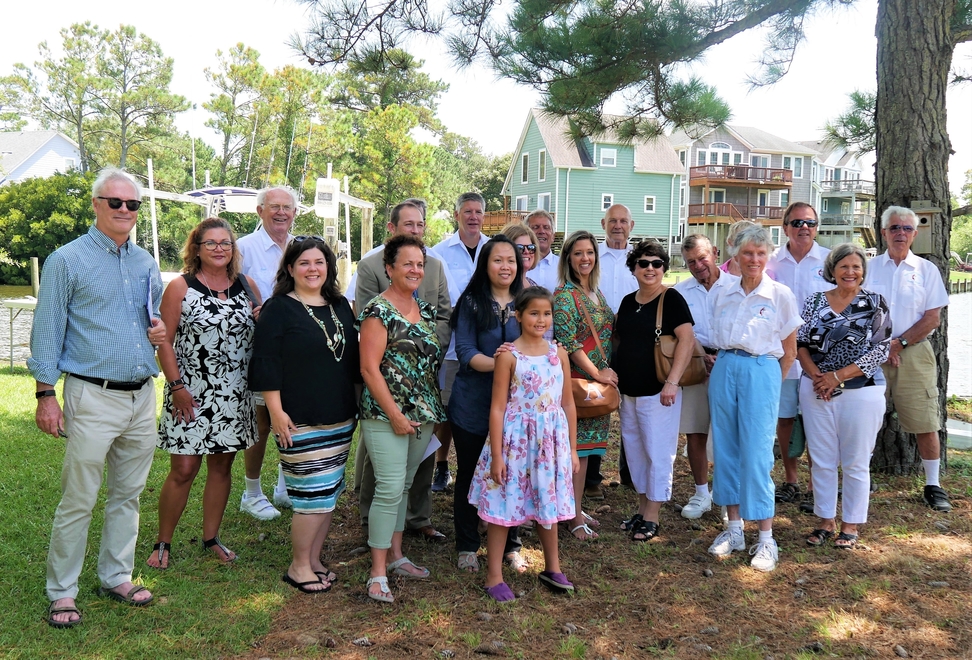 A long, difficult but determined trek got Pat Moncur from her native Thailand to this perfect July day, to a celebration that buzzed with well-wishers in the back yard of her new home in Kill Devil Hills.  It was a party filled with folks who knew well what Moncur had endured to get to this place; a good place, she said, with “nice neighbors and quiet people around me. Not scary people.”

Pat and her daughter Savannah, a precocious and confident 8-year-old, have had enough scares already. Pat came to America as the new wife of an American serviceman. The marriage was brief, but she and Savannah persevered through life in homeless shelters and grubby rental homes. She recalls being swindled out of a $500 deposit by a former landlord, and places where fighting and fear were constants. And once she found a more suitable apartment she had to move when the landlord sold it.  Life was constant turmoil and uncertainty.  In her most desperate times, Pat worked three jobs simultaneously, determined to get her daughter away from ugliness and into this place she now calls home – her newly renovated house in a quiet and pretty neighborhood. She can go off to her jobs now – just two; full-time as a teller at Wells Fargo bank and weekends at a TJ Maxx department store.

Pat’s house is one of 100 being built across North Carolina – one in each of the state’s 100 counties – as part of the State Employees Credit Union Foundation’sMountains-to-the-Sea Challenge. The SECU Foundation has put up $10 million for the challenge. As soon as a homeowner assumes a zero-percent-interest SECU mortgage, the Foundation returns the funds to the Habitat affiliate so that another home can be built. The foundation is funded with the $1 per month maintenance fee donated by each member.

Pat was 23 when she came to America. She held a degree in hotel management and had dreams of gaining a master’s in the United States. That dream is unrealized, but the giant step of home ownership brings stability and peace of mind, and the possibilities after that are endless.  “I probably will still have to work two jobs,” Pat says, “But I’m not as stressed as I was before. Single moms have to work a lot, to pay for day care. I don’t have a day off.” Some days, she says, she goes to work in the morning and doesn’t get home until 11 pm.  “Habitat helped me,” she explains with quiet gratitude, adding that despite her work schedule, “I have a quiet life.”

The home in Kill Devil Hills, a popular beach community in Dare County, is a renovation, completed under the auspices of Habitat for Humanity of North Carolina in Raleigh. A major boost came from Caring Hands, a group of volunteers from Duck United Methodist Church. “I have a lot of people to thank,” Greg Kirkpatrick, CEO of Habitat for Humanity North Carolina, told the crowd. He explained that after extensive renovation by Helping Hands and volunteers from many other churches, the small house was appraised at $215,000 – more than the typical Habitat home, largely because of the expense of island real estate.  John Park, director of the Caring Hands ministry, spoke of the hard work that went into refurbishing the house; much of the work that had been done by the previous owner had to be re-done; even the interior painting was more difficult than most due to poor preparation of surfaces. “I didn’t understand the magnitude of what we were getting involved in until we got here. I am 70. I trust God that he is going to keep our bodies going. We struggle to get up in the morning and stand, many of us. But it was a real privilege and blessing to be here and participate in this. We put in 500 or 600 volunteer hours. People from BB&T are here; they spent a good deal of time painting the interior. It was not easy.”  Pat Regan, a Caring Hands member who lives in Southern Shores, said the group does many projects a year, but that Moncur’s house was a much bigger task than most.  “It took us eight to 10 weeks of working on the house, five people a day, five days a week.”  But he relished the joy of joining others in working toward a common goal, doing good in the world.  “Everybody loved it. It was a lot of fun being with each other.”

Finally, Pat was handed the keys to the house that she and Savannah will call home—a permanent, stable, safe home after so many years of uncertainty.  First, she apologized “for not speaking very well.” But then simple eloquence came forth. “I appreciate this from the very bottom of my heart.”

← Keeping Their Eye on the Prize, A Forsyth County Family Achieves Homeownership
Building Faith with Homes for Families: Habitat for Humanity Creates a Home for Tyrell Family →