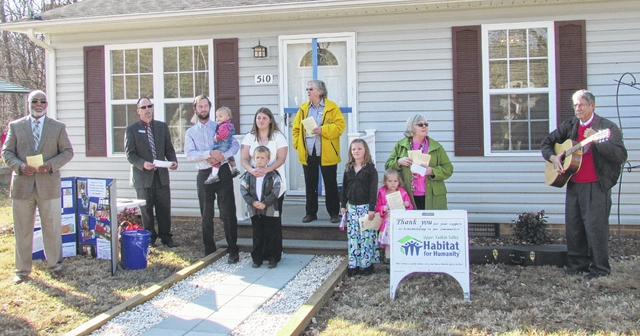 Hardwork Pays Off For Jonesville Family of Five

For Cassie James, salvation for her young family came through social media. A bad wreck five years ago had left her husband, Billy, unable to work. With their four children, ages 8 to 1, they were living on her pay as a nursing assistant who commutes to a Winston-Salem hospital to work three 12-hour shifts per week. Home was a rented a 45-year-old, 950-square-foot mobile home. The baby slept in the living room.

Cassie was on Facebook when she found the Upper Yadkin Valley Habitat for Humanity page, and hope was born that she had a way – with yet more work – to get her family out of a cramped, outdated box and into a real home. A home that they would own.

In late November of 2016, what once seemed an impossible dream came true as Billy, Cassie, and their children stood on the front stoop of their renovated three-bedroom, two-bath home on South Mineral Springs Drive in Jonesville. Before them was a gathering of Habitat staff, volunteers, and family members to watch them take the keys and start a new life. “Thank you to everyone for helping us do this,” Cassie said. And then, 7-year-old son Tristin turned to the crowd: “I love everybody!”

The Jonesville property had been donated to Habitat; the extensive renovation – the house is sparkling, looking brand-new, inside and out – was done as part of the State Employees Credit Union Foundation’s Mountains to the Sea Challenge. The three-year goal is to build a Habitat for Humanity home in each of North Carolina’s 100 counties. The SECU Foundation has put up $10 million for mortgage loans to help Habitat affiliates across the state build the homes. The new homeowners make mortgage payments directly to SECU, which reimburses the Habitat affiliate, freeing up the money for another Habitat home.

Yadkin County is rural, but it adjoins the greater Winston-Salem area, and many residents, like Cassie James, commute to the city for work.

Upper Yadkin Valley Habitat for Humanity President Deborah Boulwar opened the ceremony with an explanation of how the family was able to achieve the status of homeowners. “Nothing is given, they have to work for it,” explained Boulwar, who said completing the 350 hours of work and education is “like having a part-time job.”

“They want to build a better life for them and their families,” Sellars said of those participating in the Habitat program. Families who want to become Habitat homeowners must show Family Services Director Tom Bauguess that they can afford a mortgage with Habitat, have a need for more than just more closet space, according to Boulwar, and they must be willing to partner with Habitat for Humanity. The Family Selection Committee then visits applicants to determine if there is a need.

“It’s been a struggle for our area,” says the Rev. Clyde Moore, a past president of the Habitat affiliate who spoke at the dedication. “The economy has been very slow. The money for salaries has not been there. Lots of people are living off of credit cards and have gotten into trouble.” The result is that Habitat has often struggled to find people and families that meet the organization’s standards for both need and the ability to take on a mortgage. “But we never say no” – at least, not “no” as in “never.”

“What we will do is work with our customer base,” telling potential clients that the time may not be right at the moment, but if they can establish a record of paying rent, getting their credit ratings up, they can come back to Habitat and try again.

For Billy and Cassie James, the paperwork (“There was a bunch”) and interviews and financial education and sweat equity were well worth it. “It’s really exciting,” Cassie said. “The kids are excited. It feels wonderful. It’s a dream come true.”