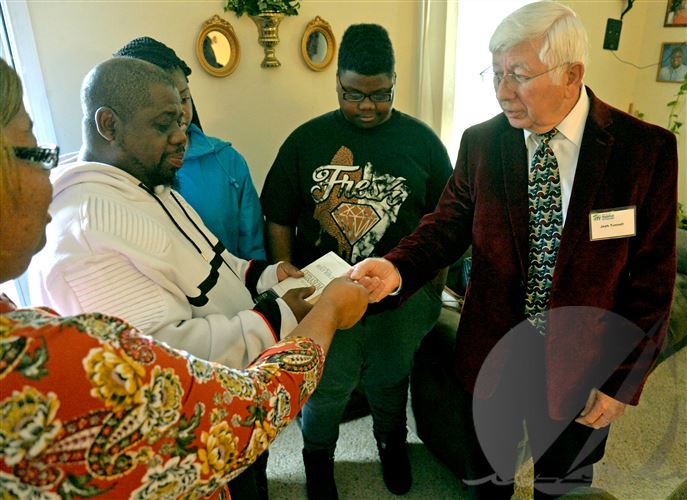 Homeowners “for real” in Pasquotank County

This article is adapted from a story that originally appeared in The Daily Advance on Monday, March 4, 2019.

It’s official: The Cowells now own a piece of the American Dream.

Cowell was speaking after a brief dedication to celebrate the mortgage closing on her family’s home at 907 Fifth Street, Elizabeth City.

The house was one of three owned by Elizabeth City Habitat for Humanity on Fifth Street. It was purchased by the State Employees Credit Union as part of the credit union’s Mountains-to-the-Sea Challenge, a partnership between the SECU and Habitat for Humanity of North Carolina to provide affordable housing in each of North Carolina’s 100 counties.

The Cowells originally moved into the house in November 2013 and up until Saturday were basically on a rent-to-own basis with Habitat. The house was built a few years earlier and later foreclosed on before it was purchased by Habitat.

The Cowells are the only family to occupy the house. Its living room is filled with family photos, a large comfortable couch, entertainment system, and all the other makings of a well lived-in home.

“We’ve done put our stamp on it,” said Cowell.

Joining Cowell in the celebration were her husband, Dennis, and their two children, Cheniya, 15, and Deontia, 13, plus Credit Union representatives and members of the Elizabeth City Habitat Board of Directors.

Jane Elfring, president of the local Habitat for Humanity, spoke briefly, and Habitat board member Josh Tunnell presented the Cowells a Bible and key to their home.

The Mountains-to-the-Sea Challenge is a partnership between the SECU and North Carolina’s Habitat affiliates. The credit union buys the home from Habitat and the new homeowners enter an interest-free mortgage agreement with the credit union. All Habitat homes include zero-interest mortgages, Elfring said.

When the homeowner takes over all they are responsible for are the mortgage payments, property taxes and home insurance costs. An interest-free mortgage could amount to a monthly payment of about $500 to $600, much lower than even a rent payment, Elfring said.