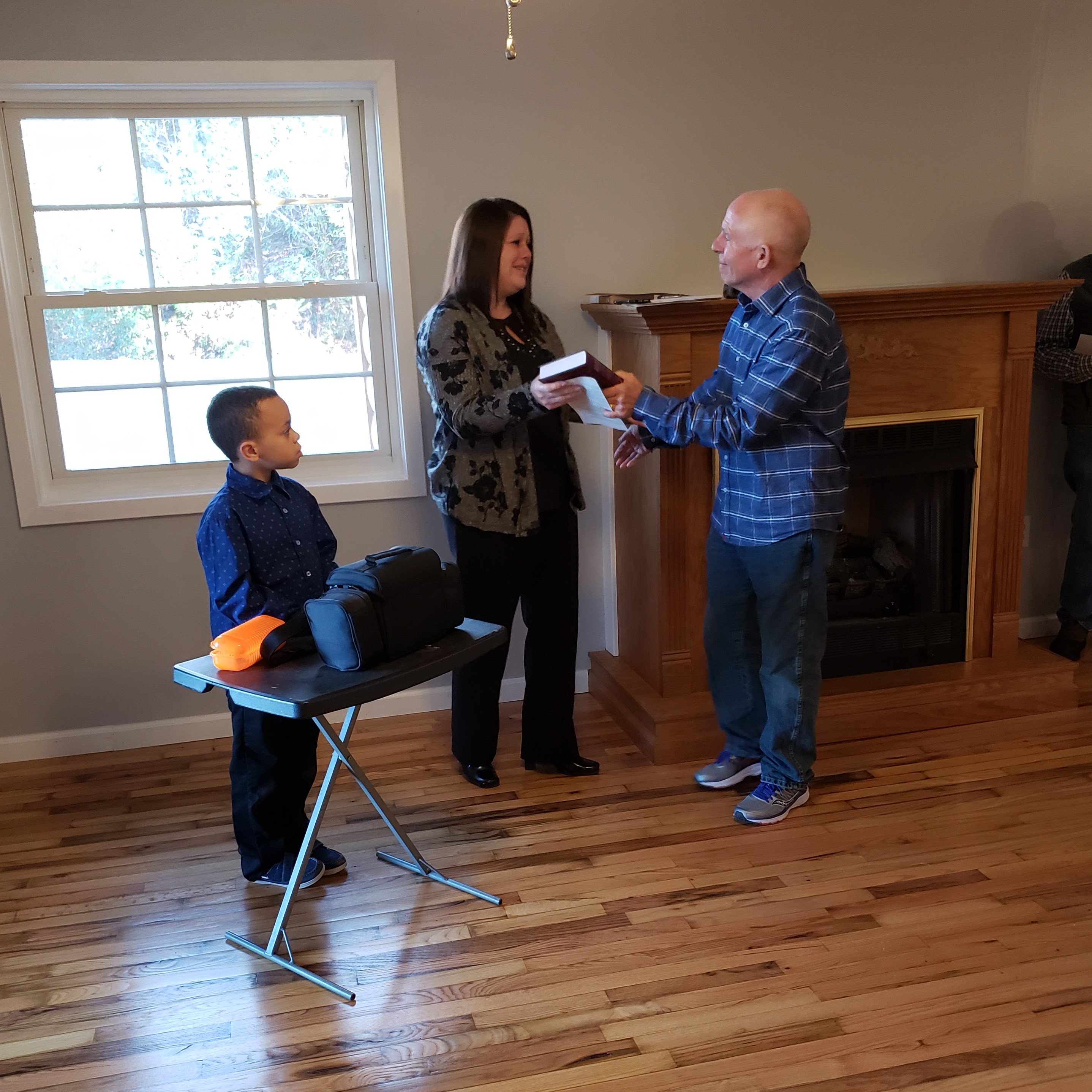 Overflowing with Gratitude in Swain County

Cynthia Lewis’s daughter, Karsyn, has been fighting an uphill battle for most of her short life so far. At just four weeks old, she was diagnosed with congenital hip dysplasia. By eight weeks, she had had her first surgery, which resulted in a complication with her nerves and almost caused her to lose her foot. It was discovered that she has a connective tissue disorder, which makes her hips vulnerable to slipping out of place at any time. In her three years, little Karsyn has had 32 procedures and innumerable MRIs and X-rays. But now this little fighter is in remission and able to run and play like a child her age should. And that’s just in time for a new view uphill. This hill isn’t a figurative one of surgeries and diagnostic tests, but rather a literal, and a wonderful, one. At the top of this hill in Swain County sits a home for Cynthia, Karsyn, and her big brother Kaison.

On the day of their home dedication, Cynthia and her children were surrounded by family and friends, as well as representatives from SECU and Habitat for Humanity of North Carolina, the two organizations that have teamed together to execute the “Mountains-to-the-Sea Challenge”, which will build or renovate a Habitat home in each of North Carolina’s 100 counties. Once a Habitat affiliate completes a home, SECU buys the zero-interest mortgage from the affiliate so that there is money in the coffers to build another house. The SECU Foundation’s philanthropy is funded by the $1 membership fee that SECU members pay. This project is the first of its kind to build a Habitat house in each county of any state in the country.

Cynthia is a gifted storyteller, and her remarks at the home dedication showed both her love of words, her children, and God. She explained that, at first, the steep hill where her new house sits was too daunting for her to even attempt to drive up. But a few weeks later she woke up one morning and felt pushed by God to go back to the property and brave the hill: “It was as clear as it could possibly be, that I had found the place where my children would grow up, and make memories that will last a lifetime. It literally was one of the most beautiful divine experiences that I have ever had.”

Now, instead of bringing to mind a health battle, “going uphill” takes little Karsyn to her new home. Cynthia says that her children can’t wait to get there after school and that it’s their favorite place to be—a place where they can be safe, secure, and have space to play and grow. “As a single mom, that’s the most wonderful thing to see,” she says. One can’t help but wonder if watching Karsyn face and win all those other uphill battles might have helped give Cynthia the bravery to face her own hill, this one leading to the kind of mobility that every parent dreams of for their children. But hearing her words and passion, there’s no doubt that, with God and Karsyn and Kaison to inspire her, Cynthia and her family will continue to tackle life’s challenges with strength, gratitude, and a solid roof over their heads.