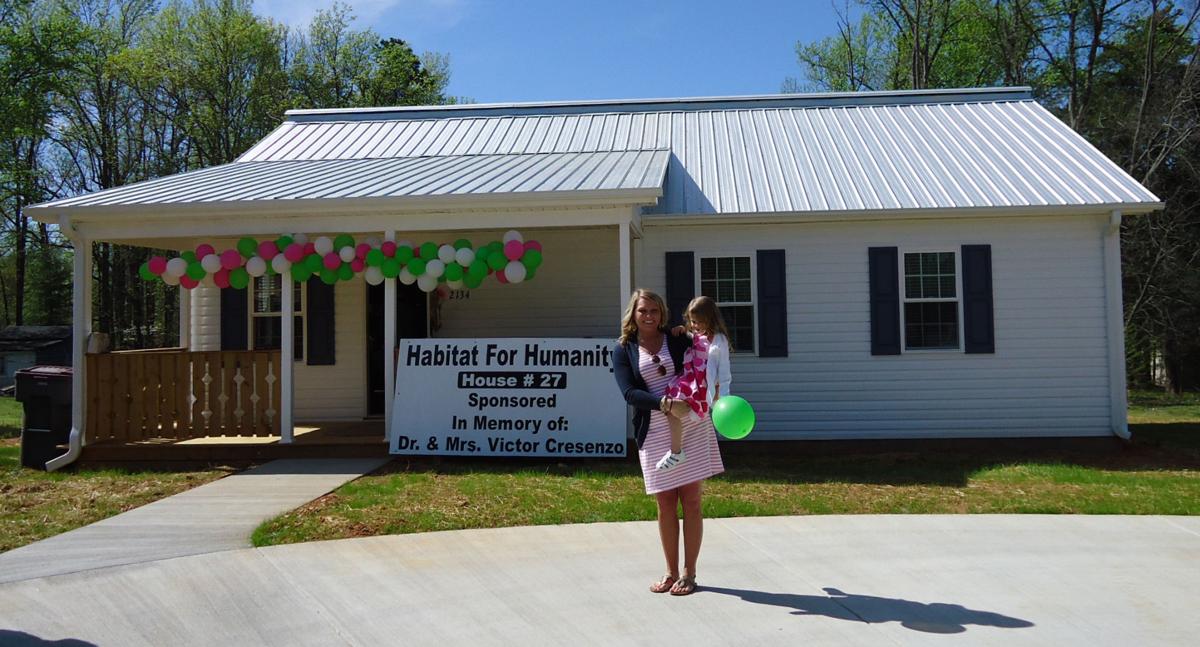 A Mother and Daughter Gain a Home in Rockingham County

This article originally appeared in the Greensboro News & Record on April 16, 2017

REIDSVILLE — Her whole life, 3-year-old Azaleigh Nance had shared a bedroom with her mom at her grandparents’ house.

But three years ago, Azaleigh and her mom, Hannah, got the keys to their new Habitat for Humanity home during a dedication service April 9, 2017.

Theirs was the 27th home built by the Greater Reidsville Habitat for Humanity since its inception in 1989, said Board President Jack Satterfield, in his welcoming remarks.

Azaleigh had been eagerly anticipating the move, in recent weeks asking Hannah when they’d get in the car. “Are we going to our home?” Big emphasis on “our.”

Azaleigh could hardly contain her excitement about her new home, especially her pink room, which she hoped her mother would decorate with flowers and butterflies.

“She loves her home,” said Hannah, a 2009 graduate of Rockingham County High School. They planned to move a “little at a time so we can make it an easier transition for Azaleigh and won’t upset her schedule.”

Hannah said Azaleigh “loves her audience” and may have to make some adjustments at not having Nanny and Paw-Paw (grandparents, Byron and Sheila Nance) around day and night.

This was also the first time Hannah, 25, had lived anywhere other than her parents’ home.

Sheila encouraged her daughter to set a goal of buying, rather than renting, a home. She also encouraged Hannah, who earned an associate’s degree in art in 2013 from Rockingham Community College, to apply with Habitat. Hannah did in March 2015, “never thinking it would ever come possible.”

But, Sheila told her daughter to be patient, because “good things come to those who wait.”

Two years after she applied, Hannah is a homeowner.

“I am extremely excited and blessed,” she said. “Mom is my backbone. She has always been through everything with me. My parents gave me a good life within the best of their abilities, and now I want to do the same for Azaleigh.”

The dedication included family members of the late Dr. Victor and Frances Cresenzo, who donated the land for the Nance home and the one next door that was completed last year. Frances Cresenzo served on the board in its early years.

Board member Rochelle Tucker presented a special Bible to Hannah, and Habitat executive director Denise Tuggle gave her a Proctor & Gamble gift box and a wreath she had made. The Rev. Lee Eggers, pastor of Hickory Grove and Ruffin United Methodist churches, offered the invocation and closing prayer. Eggers lives in the neighborhood and was actively involved in the construction of the Nance home.

Also on hand were Thomas Thompson, vice president and Reidsville city executive of State Employees Credit Unit, who explained SECU is partnering with Habitat for Humanity of North Carolina and has committed to help finance one Habitat House per county, in each of North Carolina’s 100 counties. SECU and Habitat selected Nance’s new home to fund in Rockingham County.

“This is the first time another organization has partnered with our Habitat to finance a home,” Satterfield said. “The Reidsville Habitat chapter finances our homes interest-free. SECU will assume Hannah’s mortgage interest-free so our chapter can invest in building another home immediately.”

The volunteer-based project “had a few bumps in the road, to say the least,” Hannah said. That included a “monsoon weather system” for several months in 2015 that prevented work starting on the footings and groundings for the house. Then, this past fall, several volunteers faced health problems and couldn’t work for a couple of months.

Volunteers on Habitat’s construction crew worked on Mondays, Tuesdays and Wednesdays, and then Hannah and her family took over on weekends and nights “as much as we possibly could.”

“It was just a slow process of getting everything done,” she said. “I went over there every single night and looked at the progress. I took pictures of every step.”

The first family project was waterproofing cement underpinning on a Saturday.

“It was middle of the winter, and it was cold,” Hannah said. Her dad, nephew and sister helped.

Hannah kept the house tidy and clean after the construction crews left each day.

Weekdays, she stopped by after working all day at a doctor’s office in Greensboro.

She also works part-time on weekends at a childcare center in Greensboro but can take Azaleigh with her on that job.

“We often went at night cleaning up,” she said. “I was there until 2 a.m. cleaning carpet a few days before the dedication.”

It was worth the work and the wait.

“Not many single working mothers my age can afford to buy their own home,” Hannah said. “I have a daughter, and I am excited to have this opportunity to start this adventure of raising my daughter in our own home.”