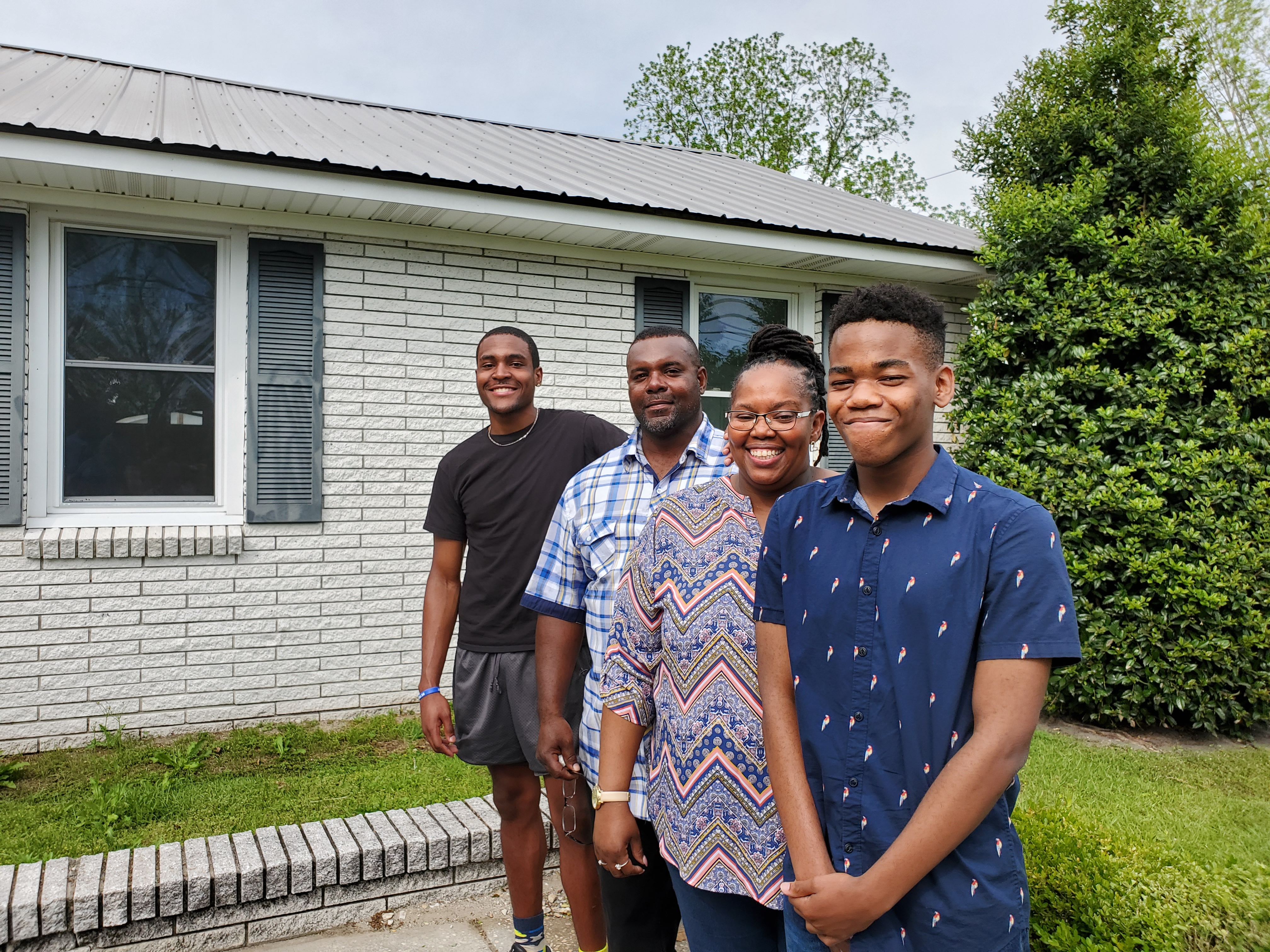 ﻿Starting Over Again in Jones County

When you walk through Linda Murphy-Hill’s door, you’re greeted with an infectious smile and a heartfelt hug. Linda’s the kind of person who lights up a room and puts everyone at ease. In the front office of the Jones County middle school where she works, she keeps the cogs turning—everyone panics if she’s not in. To put it simply, Linda makes folks feel at home, no matter where she is. And now she has a home of her own to give herself and her family the kind of comfort and ease that she gives so many others.

In 1999, when Hurricane Floyd hit Eastern North Carolina, Linda and her family were among those flooded out of their homes. They had to start over. So in 2018, when she saw Hurricane Florence bearing down on them again, she told her husband, Daneron, that they had to get out. Linda, Daneron, and their three younger children headed to Durham to stay with their oldest, Tyosha, who will graduate from North Carolina Central University this May. In the days following Florence, they couldn’t tell from TV and newspaper reports how their trailer had fared. “We felt like they were talking about the damage everywhere else, but not where we lived,” she said. Finally, she got a phone call—her cousin, Lisha Ward, who lived nearby and had also evacuated before the storm—had found a video someone posted to Facebook. A man had taken his boat out to film all around Trenton, NC. “I see your house,” said Lisha. “It’s underwater…”

Once again Linda and Daneron would have to start over, this time with three of their children—Kristjan, who is about to join the Air Force, Tyquan, who starts high school in the fall, and little preschooler Gloria—to accommodate, too. Linda, Daneron, and the two youngest children have been living with ­­one relative since the storm, while Kristjan stayed with ­­another.

Then one day, an opportunity arose. Habitat NC was working with Habitat for Humanity of Craven County to find a homeowner in Jones County as part of their partnership with the SECU Foundation, to build or rehab a home in each of North Carolina’s 100 counties. The SECU “Mountains to the Sea Challenge” involves a $10 million pledge from SECU Foundation: when a Habitat home is completed in a county, SECU buys the zero-interest mortgage from the Habitat affiliate, who can then use the money to jumpstart their next house.

Habitat NC reached out to the Assistant Superintendent of Jones County Public Schools in charge of Human Resources, Dr. Otis Smallwood, to help get the word out that homeowner applications were being accepted. Dr. Smallwood, who just happens to also serve on the Advisory Board for the Trenton, NC, branch of SECU, was excited about the opportunity for his staff and encouraged several to apply. One of those applicants was Linda Murphy-Hill.

On the Hill’s dedication day, roughly 30 people came out to help bless the home and give the family their well-wishes. Dr. Smallwood spoke on behalf of the local SECU branch and presented the keys to Linda and Daneron. Daneron, a quiet man of few words, thanked those who had gathered to celebrate this milestone for his family. “I want to thank you all. We’re looking forward to spending the next 50 or 60 years in this house,” he said, to a chuckle from the crowd. But the future looks bright, after starting over in the wake of Floyd and facing so much uncertainty about how they would start over again, following Florence. Now Linda and her family have a safe, affordable house to keep them dry in the coming years, one that they know will be standing and sturdy half a century from now. And that’s exactly the kind of place the Murphy-Hills should be able to call home.