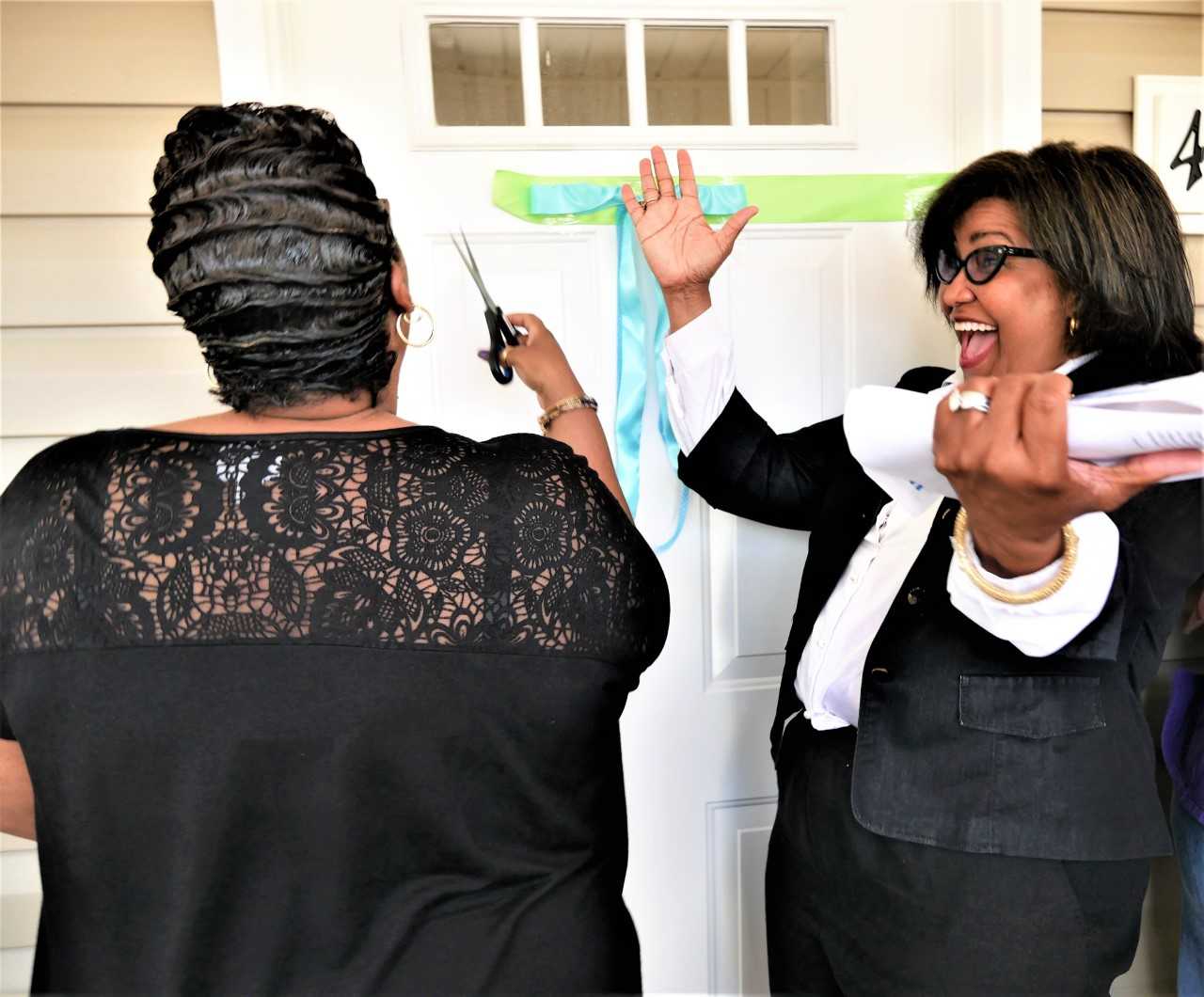 Keeping Their Eye on the Prize, A Forsyth County Family Achieves Homeownership

Meet Khadijah Shabazz. Soon, she and her daughter Sakile, 22, who has cerebral palsy, will move into their new home on Carver School Road in Winston-Salem. It’s a milestone they’ve reached by keeping their eyes on the prize of home ownership through Habitat for Humanity.  On Thursday, June 14, the Shabazz family was surrounded by Habitat officials, friends, and State Employees Credit Union officers for their home’s dedication. The house is part of the SECU Foundation’s $10 million Mountains-to-the-Sea Challenge, to build a Habitat home in each of North Carolina’s 100 counties. Once the homeowner assumes a zero-percent-interest  mortgage, the SECU Foundation returns the funds to the habitat affiliate so that another home can be built.

At the dedication, Mike Campbell, executive director of the Forsyth County Habitat affiliate, led the dedication ceremony.  “Khadijah is looking forward to having a place  to call a home,” Campbell said. “Her daughter has special needs, but Ms. Shabazz can speak for her and say that she is looking forward to never having to move again.”  “I was blessed to meet Ms. Shabazz just 30 days after joining Habitat Forsyth,” said Spencer Bennett, a board member of Habitat Forsyth. “That smile is always on her face. I’ve never heard her raise her voice, I’ve never seen her get angry. No matter what happens she always has a peacefulness about her. She is the most patient and loving person that I know.”

Fentress Gerald of the local branch of the SECU, standing in front of the house with a team from her office, spoke next.  “We are committed to supporting Habitat’s mission through the generosity of SECU members who donate their $1 a month maintenance fee to fund the SECU Foundation,” Gerald said.  She presented Shabazz with the keys to her new home. A rousing cheer went up from the crowd.  “I thank each and every one of you,” Shabazz told the crowd. “I remember riding by when this was a vacant lot. Now look what God did.

“Fifteen and a half years ago my daughter and I were abandoned and temporarily homeless.  Today we are homeowners. It has been an amazing journey – filled  with ups and downs but amazing nonetheless. I reached a moment when I wanted to throw in the towel. But God let me know that I had to keep pressing on. My time with Habitat for Humanity has taught me that God works through people.  I have learned that God meets your needs when you extend a hand to help someone else. I want to thank  everyone who has helped me – Family Services, the SECU staff for sponsoring the home and for helping to build it, the college students who helped on spring break.”

The three-bedroom home has two baths, one of which is designed to accommodate a wheelchair. Doors are designed to allow easy access via a wheelchair. It also has a firm foundation upon which Khadijah and Sakile will build the rest of their lives.
After the dedication, Shabazz told of her journey toward her new home. She grew up in Winston-Salem and has worked as a certified nursing assistant for 20 years.  Life as a mother was not easy. She had to accommodate her daughter’s special needs while studying and earning a living.  But the dedication paid off; just the preceding Friday, Sakile graduated from a program for people with special needs.  And with a pride that can come only from a parent who has done her best by her child, Shabazz gives the credit to Sakile.  “She has been a blessing to me. She’s taught me a lot. She taught me patience.”