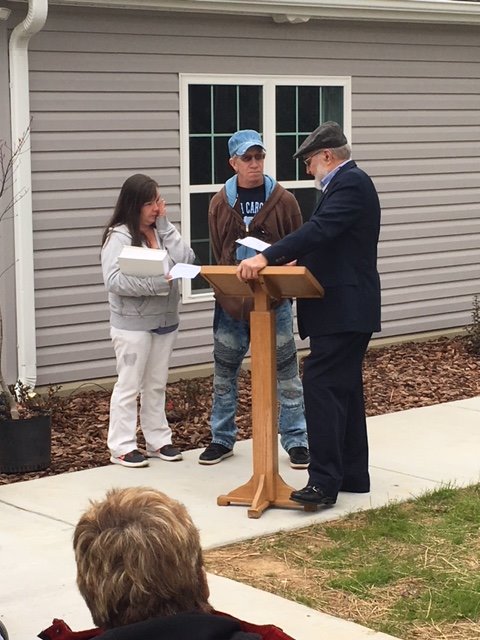 By Anna Fletcher, originally published in the Roxboro Courier-Times

The driveway of a newly-completed Habitat house was filled with people on a Saturday in February 2018, as the Person County Habitat for Humanity held a dedication for the Nachtigall family – the recipients of the organization’s latest project.

Jerry and Melissa Nachtigall, along with their three children – Destiny, Justice and Summer – moved into the one-story home Feb. 24 after helping with the house’s construction, which began in late July 2017. “The house we were living in was being sold, so we had to move,” Melissa said. “I was having trouble calling other renters for wheelchair ramps and stuff for Destiny; and everybody was like, ‘I’ll call you back’ or ‘No, I don’t want modifications done to the house.’”

Destiny, a lively 18-year-old with short, light-brown hair and an easy smile, has cerebral palsy and gets around in a motorized wheelchair. Unable to find a suitable house, Melissa turned to the family’s service coordinator, Dana Faulkner. “She told me that she had just been at a meeting, and somebody was there from Person County Habitat for Humanity,” Melissa said. “She said, ‘Let me get in touch with them.’ So she set up an interview for us; and we went and met with them. A few months later, they told us that we were chosen.”

That was June 2015. For the next two years, the family lived with Melissa’s father and brother while they picked out floor plans and designed the specialized house. Three hundred hours of “sweat equity” – work that recipients must do to receive a Habitat house, such as helping build another house or working at the organization’s yard sales – and several Habitat classes later, Jerry says, they had finally finished construction.

Not only was the house a family project for the Nachtigalls, it was also a community effort that included volunteer labor, monetary contributions, and donations of building supplies from various local businesses, organizations, and individuals.

After an opening prayer and a welcome from PCHFH President David Forsythe and PCHFH Director Daniel Collins, respectively, Roxboro Mayor Merilyn Newell shared a few words and then turned the microphone over to representatives from three organizations that provided support. Former PCHFH board member Graydon Spivey then presented the Nachtigalls with a family Bible, and Collins led the attendees in a house blessing.

Pamela Hobbs from the State Employees Credit Union Foundation, which invested $10 million into Habitat [NC], spoke about the foundation’s partnership with PCHFH. “The SECU Habitat Challenge Initiative is a partnership to expand affordable housing by building a new home, or renovating a Habitat home, within [each of] the 100 counties in North Carolina,” she said. “Members who founded the SECU Foundation are committed to supporting Habitat’s mission and the belief of what we can accomplish when people come together to build a home for someone in need.”

Briggette Slivinski, the local branch manager at Wells Fargo Bank, spoke on the relationships that were formed during the build. The branch provided a $15,000 grant to the project, as well as more than 60 hours in volunteer time from its local staff members. “My team members built partnerships and friendships with the family and the people while they were building on this house,” she said. “Our motto being ‘Together, we’ll go far,’ – I think that rings true for the Habitat process, as well. We’re so grateful to be part of a community that cares about one another and part of a company that can support our community in its involvement.”

The Rev. DuPre Sanders from Roxboro Baptist Church then offered a meditation on loving others with actions. “Love is not an adjective – it’s a verb,” he said. “It’s about action. And I think this house is love in action.”

He likened the house to a sermon that teaches the community what love really is, quoting a Bible passage from 1 John that says, “Dear children, let us not love with words and speech, but with actions and in truth.” He then read the poem “A House Becomes a Home,” written by Kathryn Decker, and reflected on its meaning.

“The truth is, as much work that has already happened, the greatest work is still ahead,” he said. “Because there is that work of building the house; but then, the house must become a home. So we dedicate this house, and our prayers go with you as you do the good work now of making this house a home.”