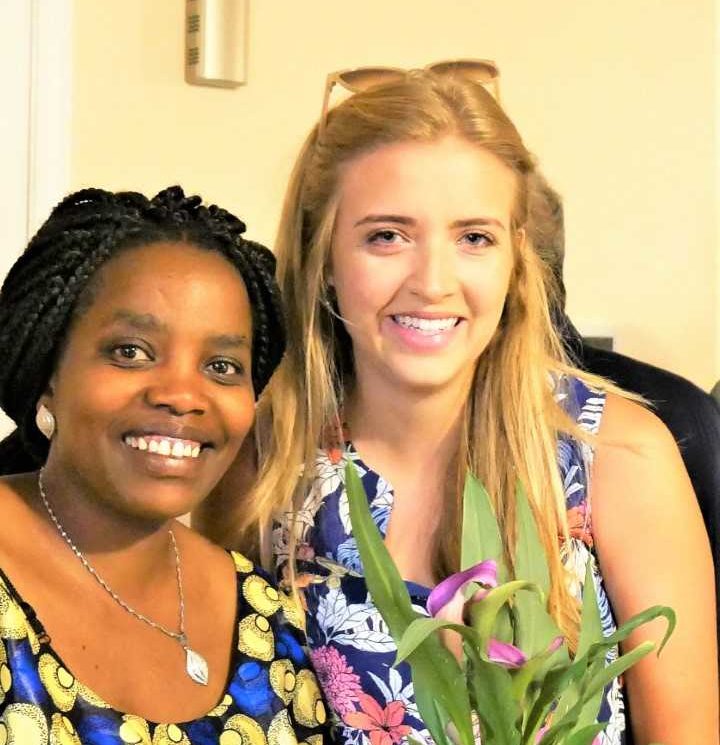 The Smell of Progress: Flowers and a Fresh Start

For Charlotte Furaha, two decades of uncertainty came to an end on a muggy August day in High Point. With prayers, a key, and a new mortgage, this youthful-looking woman whose life had long been unstable finally stood on solid ground. It was her moment of triumph after decades of determination.

She was in her home, safe, with her children Christian, 15, and Divine, 13. And good will was abundant; the family was surrounded by staff and volunteers with Habitat for Humanity of High Point, Archdale, and Trinity.

Furaha’s story is harrowing. She escaped the poverty and violence of her native Congo to spend 16 years in a refugee camp in Rwanda. She arrived in High Point in 2012 with her children. And in this strange and foreign land, this single mother who speaks four languages saw a chance to grasp the American dream and held tight to that hope.

Furaha’s new home is one of 28 that the Habitat affiliate has built in the Washington Terrace neighborhood of High Point. Three more are under construction, explains Susan M. Wood, executive director of the Habitat affiliate. The changes here are obvious amid the gently rolling, heavily wooded Piedmont landscape as the neighborhood’s decaying rental houses yield to the tidy, sturdy Habitat homes. “We have several house dedications a year. We’re making progress,” says Jonathan Manning, the construction manager. “People come from all walks of life, and corporations pitch in to help us build these homes.”

Even as he speaks, work is going on at nearby build sites.
Manning recognizes a group, soggy with sweat and mud, standing at the back of the crowd.
“The folks in the back look like they’ve been working all day.”
“We can smell them,” someone calls out.
“If only we could all smell like that,” Manning said. “That’s the smell of progress.”

The Furaha home is one of 104 that are being built as part of the State Employees Credit Union Foundation’s Mountains-to-the-Sea Challenge, to build or rehab a Habitat home in each of North Carolina’s 100 counties. The $10 million initiative is funded by the $1 per month maintenance fee that each SECU member pays. After the homeowner assumes a zero-percent-interest mortgage from SECU, the money is returned to the Habitat affiliate so that another home can be built.

Furaha heard about Habitat from friends who lived in the Washington Terrace neighborhood. She has worked for five years at Winston-Salem Industries for the Blind. The steady income helped her qualify for a Habitat mortgage. “There’s a big community (of refugees) here,” she explains. “People come from all over.” She points to a house across the street that is home to a friend who came to High Point from Burundi. She seems comforted by the familiarity of her neighbors. “There are 12 cultures here,” Wood explains; High Point has become a magnet for refugees. Some families were evacuated from New Orleans in the wake of Hurricane Katrina and made a new life.

On this day Furaha is aglow in a bright dress that seems an homage to her African heritage. Her youthful looks and bright demeanor stand in contrast to her harrowing life story. But when she addresses the well-wishers who are arrayed in front of the porch of her new home, the pain of her past slows her a bit. The remarks are brief; memories get in the way. But she speaks from the heart.

“I don’t have words to say about this day.” She tears up; decades of uncertainty, fear and sorrow break her cadence, even on this happy occasion. “Thank you so much for your help. I thank everyone who helped me.”

← In Flood-Hit Public Housing, a Reminder That the Poor Bear Brunt of Storms’ Fury
Peace of Mind in Clay County →