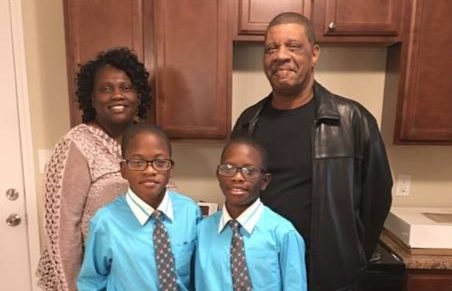 They’ll Be Home for Christmas in Bladen County

ELIZABETHTOWN – A Bladen County family received an early Christmas present – the keys to their new home – on Dec. 4, 2017, courtesy of Fayetteville Area Habitat for Humanity.

The McIntyre family received the keys to their new home on King Street in Elizabethtown. Van Gunter, with Fayetteville Area Habitat for Humanity, presented keys to Jerry, Regina, and their twin sons Jarod and Jerry. The foursome also received a flag from Bladen County Habitat Executive Director Dawn Madden and a Bible from Fayetteville Area Habitat for Humanity Vice President of Family Services Chaly Cross.

“I can’t tell you how impressed I’ve been with them,” said Tammy Laurence, executive director of Fayetteville Habitat, of the McIntyres, “their character, their hard work, their love for God, and God’s hand on them.”

The home is funded by the State Employees’ Credit Union Foundation. It is part of SECU Foundation’s Mountains-to-the-Sea Challenge, a $10 million commitment to build a Habitat home in each of North Carolina’s 100 counties. Habitat for Humanity homes are provided to families who put in 300 hours of “sweat equity.” Once the family assumes a zero-percent-interest mortgage from SECU, the funds are returned to the affiliate so that another house can be built.

Regina McIntyre said the home “means the world” to the family.

← At the Foot of Grandfather Mountain, a New Foundation
A Sunny-Yellow House in Pitt County →